After six weeks, the builders have finally packed up and cleared off. The bar has been built, the toilets are ready, the alarms are all set and the light fixtures are up. Now we can finally put our touch on the premises…and buy some beer, if we have any funds left over. 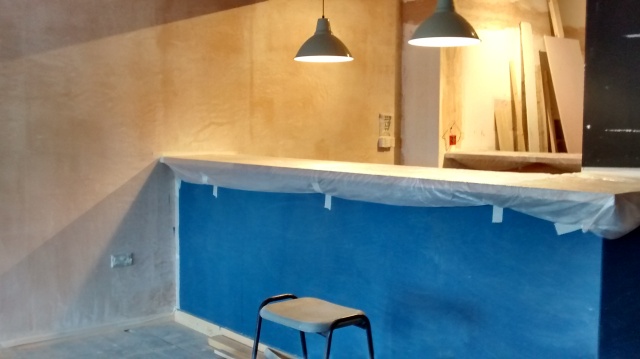 As alluded to in my previous post, the work took twice as long as expected but at least the bill didn’t double. The single biggest unexpected expense was installing pink plasterboard to the ceiling (for fire safety) and having it plastered. A few other surprises popped up along the way, like how there needed to be a vision panel (that’s a glass pane to you and me) in the door going upstairs – and since this is a fire door, it had to be safety glass for an extra £100.

Also, we needed a large extractor fan (£500 to buy, £400 to install and £80 for a sensor so it can go off and on automatically)…and the spindles were too far apart on the stair banister, so to prevent anyone slipping through to their doom we had to buy new spindles..,oh, and that new fire door is going to be the Achilles’ heel in our security unless there’s a shutter to pull down over it….

Each day as the builders, plumbers, plasterers and electricians were hard at work I’ve been doing the admin: contacting suppliers, organising the paperwork, buying sundries, sorting out insurance, designing fliers, updating the Facebook page, etc. Then each night with my partner and occasionally some of our friends we’ve been putting in five hours of decorating.

Our premises licence finally came through, but only after more chasing, trying my best to remain jovial and polite throughout. My partner said I should have enquired about the council’s complaints procedure, but I’m of the view the softly-softly approach is better (especially with people who hold the future of our business in their hands) and sure enough within an hour of leaving a jolly voicemail with the licensing officer she issued me with the licence on an email and promised to provide me with a certificate within the fortnight. Now where have I heard that before?

Something which caught me on the hop with the council was the registration process at Environmental Health. Apparently we should give 28 days advance notice before trading. This I learnt in mid September when preparing to take an online hygiene course and prepare our food safety policy. The 28 days in our case would mean not be able to open until the 14th of October, when in fact we’re aiming for the 10th.

What’s aggravating is that it seems nothing happens during these 28 days. I thought someone would be in touch to check in on us personally (as Building Control have been doing) to advise us during the building stage. Having had the police, fire brigade, licencing authority, building regulations and planning permission team all weighing in with their views before opening it seems odd that Environmental Health would take no interest in making sure our premises meet their standards while we still have the builders in.

Having spoken to someone at Environmental Health, it sounds like they are so overstretched they can hardly keep up with the business owners like me who try to do things by the book, let alone all the outlets opening, changing hands or changing the way they do business. I gently pointed out that they were copied in to my licence application back in May, so that would have been an ideal time for me to receive their form letter pointing me towards the online resources available and to advise me of the 28-day registration period. As it was, I only received this information after registering. The officer at the council took this on board and said that the way they operate means they would have ‘eventually’ got around to me. The mere fact I registered my business is more than what many others would bother doing, so a gold star for me.

All this came to light at that particular time because we were invited by the local business owners organisation to take part in a food market in the town precinct. Before taking part we needed public liability insurance plus our Food Hygiene training and rating certificates. I sorted the insurance (something I’ll touch on in a future post) and the organisers confirmed with Environmental Health that as we were selling bottled beer for consumption off the premises that food safety rules did not apply. A temporary event notice (TEN) had already been sorted by the organisers.

And so we found ourselves under a marquee outside the front door of the local Sainsbury with 250 bottles of beer, a dimpled mug full of fliers and some heavy duty carrier bags which a friend had dug out of his shop’s storeroom. Over the course of 5 hours we sold 150 bottles and talked to dozens of people, all of whom seemed excited by our venture.

It was a great way to meet potential customers, share our plans, hear their views and to bring in some money to boot. I’ll explain more of the practicalities involved in a future post, but we’ll definitely consider similar events in future, not just because of the profit element but because of the exposure as well. The number of likes on our Facebook page has since tripled to well over 300 fans, so the £10 pitch fee was well worth it.

That’s the news for now. The clock is ticking and there’s plenty to do, so I’ll sign off for now. Until next time….

This entry was posted in Business ideas/analysis. Bookmark the permalink.

2 Responses to Getting closer…